I love love.  I love love between humans.  All of them. I love the beauty in people when they are in love with one another. I love seeing them treat each other right. Really love that! And I love gay men.  I’ve had the luxury to see gay couples in romantic embraces, kissing at a wedding, or holding hands as they walk, and always wished I could capture what was to me a very kodak moment! Oh, all those pictures I didn’t take!

Growing up I knew nothing of gay anything.  The minute I learned of it, I fell in love. I can’t tell you when it was, but I know that one day I knew I loved gay men with a passion. I became their greatest defender. I wanted to be all of their best friend.  And I love the queens! One time I went to a drag show and was like a child in Disney Land! I was laughing and staring and so enchanted! I loved putting dollars on the performers.  I loved flirting with them, and watching their flamboyant attitudes take flight.  One guy that was with us–the group that went to the show– was gay, and I sat next to him and was able to express what I felt.

A lot of people ask girls why they love gay men.  “Because they’re safe” is usually the answer (in many forms).  I don’t think that when I answer.  Doesn’t even cross my mind!

“Because they are beautiful!” is what I would say.  Women are beautiful, yes, but we can’t be what a gay man is.  We can’t do queen. Not even in our dreams! We can do drama queen, oh yes we can! but we can’t do drag queen.  I would be so sad if there were no queens in the world!

A few years back I had just arrived in Ithaca and was living with my roommate/best friend, Julia.  Both of us lived in some sort of cocoon where we hardly knew what was going on in the world.  We knew people were voting on the equal marriage bill for New York State, but we didn’t know the progression of it.  We just decided to go to a bar to have our “roommate drink night”, and as magic would have it, we were at the right place at the right time. Felicia’s.  The most gay & lesbian bar in town.  Everyone was looking at their smart phones, someone next to us yelled out, YES!!!! Equal Marriage law had passed!  Drinks were flying, and the energy was so high! What a perfect moment.

As magic would have it again, we had planned on going to Rochester a week or so later to see my dear, gay, guy-friend perform in a play.  It happened to be the weekend that everybody was celebrating the passing of the Equal Marriage law with the giant Pride Parade. Oh, what a blast! The pictures below are from the parade.  I think the year was 2011.  In one of the pictures I am hugging the friend we went to see perform. What a great man he is! And what a great actor. 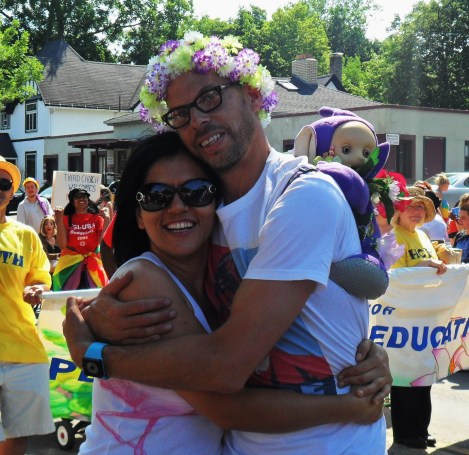 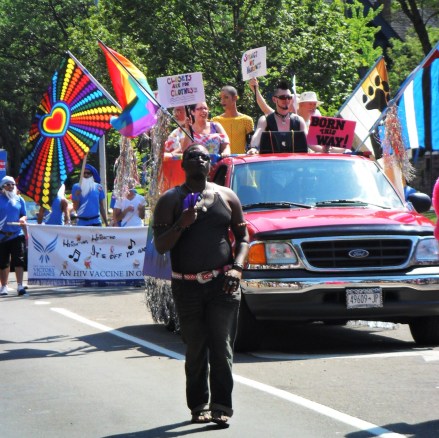 View all posts by Gabriela LeBaron