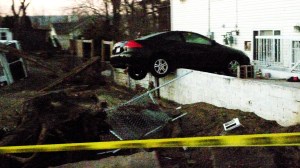 They say the storm was bad, but I think the aftermath is worse.  As a matter of fact, I think the aftermath is always worse! Surviving a hurricane is scary, yes, but staying alive and well after you lost everything you have worked so hard for?  It’s not just about being displaced or having to live in a shelter.  It’s also not about losing all your furniture and all the other stuff, stuff and more stuff that you fill your home with.  It has nothing to do with the things.  I has to do with the way you lost it–all at once.

The flood that Superstorm Sandy brought in took everything away from some people, and some of these people have no way to ever recover what they lost.  The aftermath is not only dealing with the loss, but cleaning up the disaster that was left behind.  Every last little thing that Sandy’s water touched has to be thrown out, and the homes have to be stripped down to their bare bones.  For these families, it’s like holding your own dead baby in your arms and having to cut into his body.

As I walked with my teammates, from house to house, offering help to anyone who needed it, I could almost physically touch the grief in the air, yet the people were grateful.  They were the most grateful people I have ever met in my life!  It was that they needed help so bad, so much so they probably would not survive without it.  A tiny bit of help was life-saving, so they were grateful beyond what any words could express for volunteers stepping in to save their lives.  And all we did was carry the heavy things out and put them on the street.  We did the hard labor that they, being alone and as grief stricken as they were, could not do. But beyond carrying out appliances, sheet rock, rugs and furniture, we also carried their grief in some mystical way. We were the white blood cells sent in to heal that wound.  While we worked, we held it together and just offered support and more support.  It wasn’t until after we got to our respective homes that we, ourselves, fell apart.  The storm hit us, too.

Back at home, back at work, my inner tears had kept falling. They fell for days! Thank god for all those spiritual healing tools that I had learned over the years!  Also, thank god for some great support from sisters, friends, roommates and coworkers! You guys all brought me back to daylight:-)

View all posts by Gabriela LeBaron

1 thought on “storm or aftermath?”